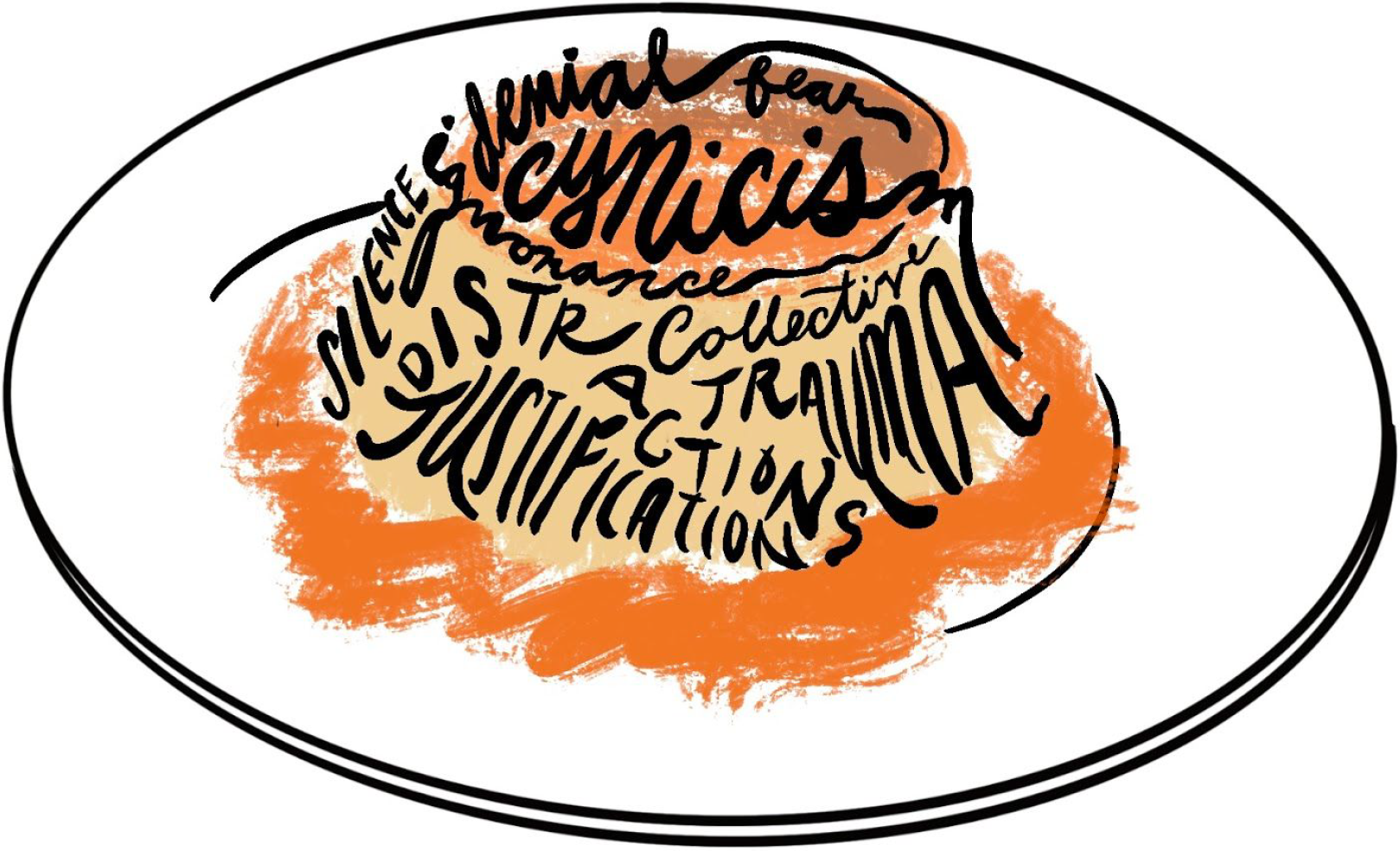 The 'How to get away with Racism' recipe

This is a Cuban-American take on a cult favorite dish. It has mostly been passed down in verbal conversations, bits and pieces here and there, which I have gathered throughout my lifetime. This written version is a product of watching and listening. I see you tia y tio. I see you, family friends who spend the day reposting racist news clips on Facebook. I also hear you, the trauma and loss you’ve experienced. I wonder then, how the irony of your own words, “why don’t they get over it already?” does not resonate with your own troubles. Cuban exiles have a rare opportunity to empathize with the Black experience in America, so why then, do they choose to ignore, suppress, and condemn it?

A few drops of Ignorance in the form of, “Hay que mejorar la raza/We must better the race,” and, “If you don’t like this country, leave!”

6 tablespoons of Denial—my family’s brand of choice has been “Yo no soy racista. Yo me crié con Negros/I am not racist. I grew up with Blacks.”

2 cups of Justifications, many of which are baseless and hateful: “Esos negros bagosos son unos ladrones/Those lazy Blacks are thieves.” “What about Black on Black crime?” Why is George Floyd, a convicted delinquent, being martyred by the liberal media?” (the more salacious and misleading, the better)

2 morsels of Distractions—a short list of the most notable: “All lives matter!” “Looting is a crime,” “Why don’t you talk about the cop who got shot by a Black man?”

1 slice of Collective Trauma—piece of undiagnosed trauma goes a long way in uplifting fear, especially if it remains dormant.

A dash of Cynicism, brought on by a disillusionment and distrust in government, which results in a rejection of positive change. *If you are out of Cynicism, a suitable substitute is Silence. At times, it enlivens the potency of the other ingredients, resulting in stronger aromas of Complacency, and elongates the recipe’s shelf-life.

1 stick of Fear, preferably the irrational kind—the one that will cloud your judgement and incarcerate your soul in its survivalist goal to not repeat the past.

Step 1: Preheat Before mixing the ingredients, it's important to set the ideological and cultural scene. Since infancy, white and white-passing Cubans have been lauded for their European facial features, fair skin and straight hair. They are taught to be wary of whom they marry and have babies with. The mantra is, “Hay que mejorar la raza”—words that my own dark-skinned grandmother has uttered at me. That’s the thing about racism, you can be prejudiced even against your own race. A Cuban, able to trace her family lineage back to Africa, is still educated to believe she is not as worthy as her “whiter” counterparts. Fidel Castro capitalized on this divide, appealing to poor, Black Cubans to join the revolutionary cause. And many did.1 He advocated for Black rights, ending segregation laws when he came to power. He sent Cuban troops to Angola to fight the apartheid regime, and has been described by Nelson Mandela as an “inspiration to all freedom-loving people.”2 Post-revolution Cuba saw more Black people in positions of relative power—police officers and lower level government officials—than before, albeit as a way to garner political favor.

Step 2: Mix Ingredients Heirloom racial supremacy; Castro’s fervor for Black rights; and Cuban exiles’ hatred of him as their oppressor; All are ideal conditions for the rejection of the Black experience in America. When mixed together, the ingredients for this recipe—ignorance, denial, justification, distraction, trauma, cynicism, and fear—form a raw mass of energy, ready to be fully baked in the South Florida sun. Thus, the fight against communism becomes the fight against Black rights.

Step 3: Bake Collective memory and shared trauma binds the Cuban exile community in Miami. The city has become an annex of Cuba, one plagued by a ‘bubble mentality’ where an irrational fear of communism is often reinforced and coddled. Trauma resulting from loss of home, liberty, and land goes undiagnosed. Instead, it is commodified as experiential currency. Take for example, my aunt’s absolutist comment, “I know better, because I’ve lived through it, and you haven’t,” which highlights a lack of desire to talk about what happened and why, to break down the good and bad, where it all went wrong—because she simply doesn’t have to. She lives in the Miami Bubble, after all. Cuban exiles believe that acknowledging systemic racism in the United States will jeopardize their cushy lives, ones they admittedly fought hard for. It is as if being an ally to the Black community would automatically sign them up for ‘Antifa’ membership.

Step 4: Let Cool Irrational fear of change and revolution expands within the minds of the Miami Cubans, morphing from innocuous thoughts of “I don’t agree with rioting for a social cause” to an escalated “Why are Black lives the only ones that matter?” Subsequently, the Bubble acts as a filtration system, hand-picking news events that meet the collective’s biased standards, relating to righteousness, virtuosity, and most importantly, anti-communism.

Step 5: Serve So then, how does a tolerance for racism in Miami affect the larger conversation at hand? This is where groupthink morphs into group-vote. In the 2016 election, 54% of Cubans voted for Trump, double that of the Non-Cuban Latinx community in Florida.3 A notorious swing state, Florida has sided with every triumphant presidential candidate for the last quarter century.4 Agreement with Trump’s racist remarks illuminates the Bubble’s effect. Thus, voting, a silent but powerful action, is one way to get away with racism. It is an action that is oftentimes swayed by the media they consume. Enter Facebook, the virtual Miami Bubble. It is a place where racist zeal is echoed by peers, and where “unfriend” and “block” options eliminate the nuisance of ever having to confront dissenting opinions. If you only knew how many “friends” have removed me for voicing my opinion, contradictory to the “freedom of speech” slogan they so proudly weaponize.

Verdict This recipe is undercooked yet overdone. It is laden with acerbic guilt and soaked in ignorance. Bitter cynicism and fear spoil any semblance of compassion or joy. Freedom from oppression, one that Cuban exiles fought so hard for, has never truly been attained as they remain chained to a selfish mindset that spurns injustice, no matter its form. To all my fellow Cuban exiles, to all of those who are just learning about hidden racism in the Cuban experience, it is time to become lucid, denounce discrimination, and ultimately become freed of past burdens. Today, compassion will no longer be granted unless it has been reciprocated.