Notes from the Author
This is a work of allegorical short fiction that narrates a thought experiment under hypothetical extreme conditions. Though surreal in style, it incorporates allusions to the present COVID-19 pandemic where physical isolation makes media the only source of outside information and exacerbates the lack of communication among isolated people. Ever since the pandemic broke out, the world is becoming more panoptic and power is becoming more centralized. This parallel world, which may be viewed as a failed city by conventional standards, becomes shattered into fragmented realities and raises questions to respond to the question of where the boundary between the real and the virtual lies. It imagines a new world order that emerges from the disorder. 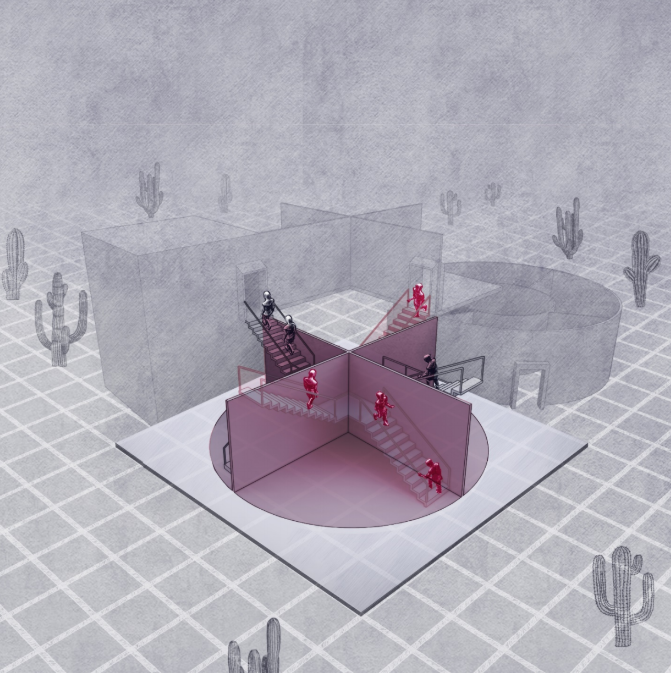 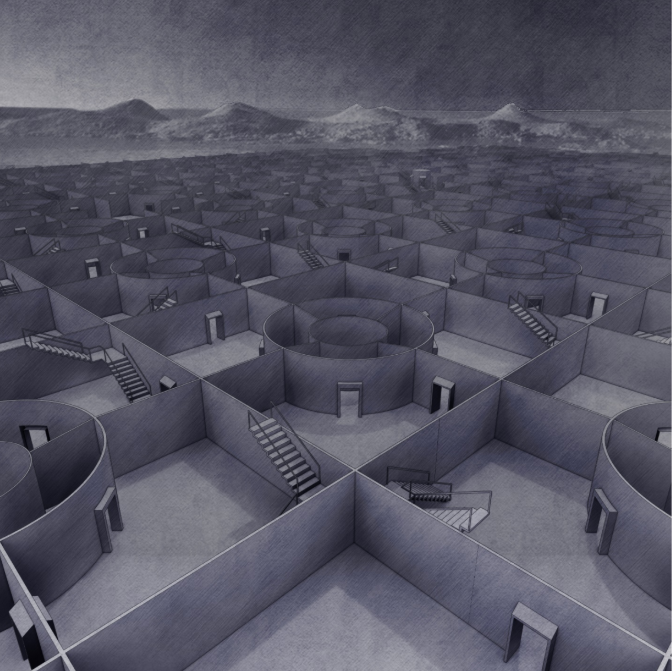 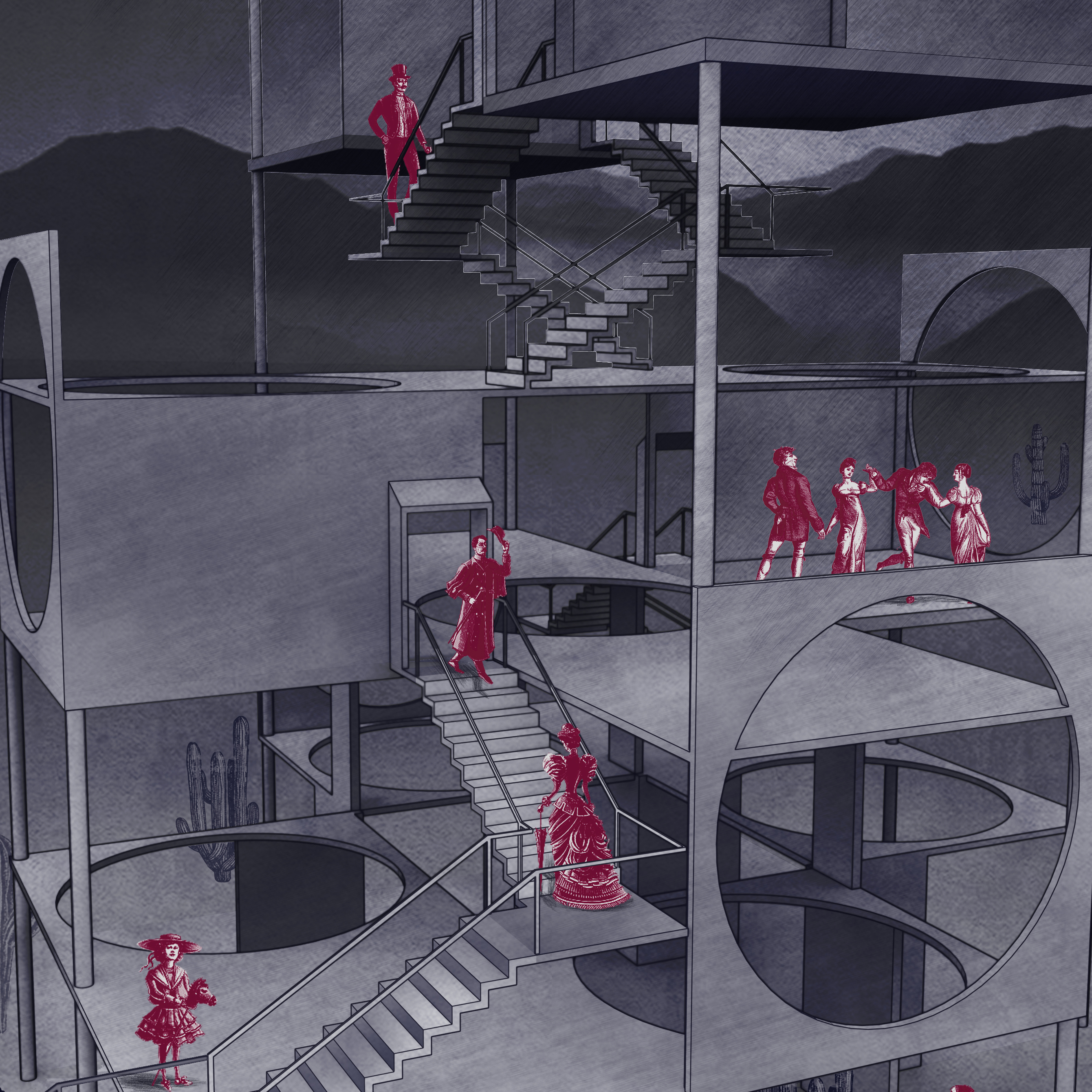 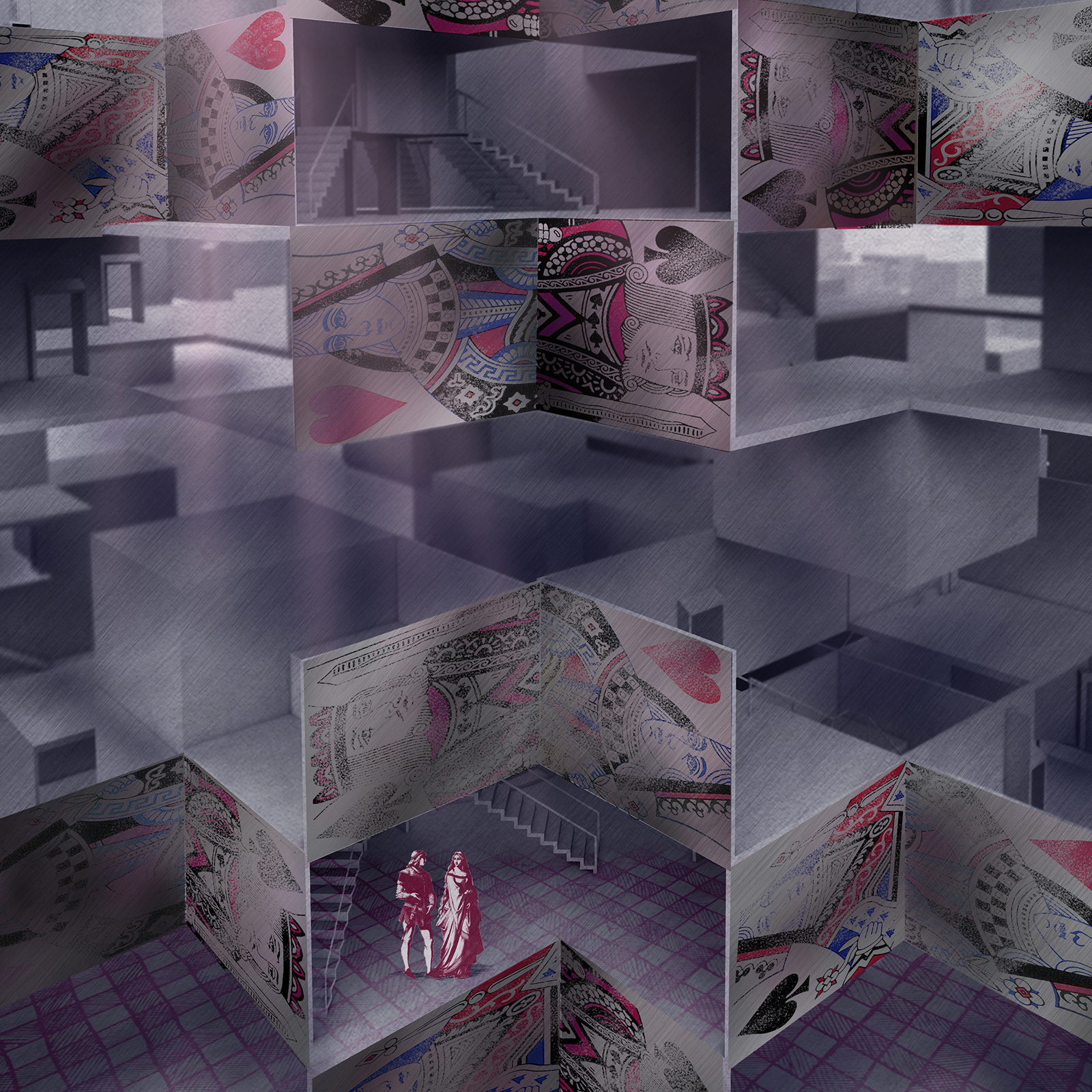 The infinity of a cityscape does not comply with the laws of physics. An individual’s world system can be an infinitely small subdivision.

You live in such a city: there are only two types of buildings, buildings that are immutable and those that are rotatory, and they look monotonously similar. Inns, offices, hospitals, and other basic sedentary venues are immutable; transportation hubs, markets, churches, and such venues that evoke physical or spiritual passage or multi-directional availability are rotatory. You have always lived in this city and have never seen or even imagined any alternative urban and social structures.

Long ago in the distant past, your ancestors built the city in repetitious rotatory parts with a special intention—to dissuade city residents’ contact with a kind of monster, a solitary human predator that they call the Minotaur. At first, there were wider roads and modified rooms. That was a time when human-eating Minotaurs were actual threats, the ancient people lived in fear and constant preparation to hide from Minotaurs’ hunt, and people who were exposed on open land or in a large gathering were most vulnerable to being discovered. Your wise ancestors soon found that such conditions only enhanced the Minotaur’s field of vision and spatial awareness, so they redesigned and rebuilt these spaces—smaller and smaller, more and more similar, until everywhere in the city, every door, every wall, every crossroad was a disorienting déjà vu.
‍
The city became denser and denser. With every crossroad not so different from another, the city had become so banal that people gradually lost the interest to explore or travel far. They assumed the city unrolled like this infinitely. Then, no one knows how or when it exactly happened, but one of the ancient people made the first rotatory building units, and the combinations and permutations that arose from the rotation multiplied the possibilities of experiencing somewhere “new.” People who encountered these rotatory units mostly rebuilt their familiar areas of life and work and replaced some immutable buildings with rotatory ones. The practice spread far and wide, and it was not long before rotatory parts were dispersed all over the city. For centuries, the tactic was very successful in keeping your ancestors safe, and no one has reported a sighting of the Minotaur for over 200 years. However, it also further fragmented the city and made people increasingly disconnected.
‍
The buildings are monotonous quadripartite circles or rectangles that contain a self-mirroring symmetry along two axes. The rotatory buildings turn about the center of the two axes. Your life in this city is simple. Like every one of your people, you abandoned navigation since childhood. It is not in your instinct to find a fixed walk path or to learn the knowledge of the city in full. The source of information in this society is entirely a news press dispensed by news booths that are at every inn, the Daily World News (DWN). Its main sections are Minotown Local News and Exotic World News but its contents are diverse. There are sections dedicated to history, editorial opinions, life advice, comics, critical commentaries, recreation, and fiction.
‍
One day, a protest erupted in reaction to the increased taxation on cactus farming. The protest went on for a few months, and then one day you met a stranger who came from a totally different zone of the city. During a casual conversation, the stranger shockingly claimed that the protest was a falsely organized act—a psychology experiment by a university professor. The professor allegedly paid his students to participate in a fake protest and on the lure many workers joined forces. You found that the stranger gained the knowledge from a newspaper that was popular in his zone from far away. The stranger’s newspaper was also the DWN.

As time passed, an eerie thought frequently interrupted your quotidian life—not whether the protest was an artful lie or a candid movement, but that the DWN distributes different, often inconsistent information to different geographical communities in your city. You carefully examined the history and realized that many times in the past, newspaper presses within the DWN network routinely contradicted each other. Different presses would disagree about facts or events, or one press would revert its previous assumptions later down the timeline. For months, you tried to travel farther distances in the interlocking buildings from cell to cell. You traversed different corridors, stairs, doors and walls, and found that your friends from long distances away didn’t know your news, and you didn’t know theirs.
‍
You spent a few years in ravenous reading and contemplation and discovered the answer to your question. There is no fake or true news. There are agencies specialized in producing rumors and media whose mission is to spread them with strong pathos. Entertainment columnists spread rumors of celebrity divorces in the same manner that war correspondents send made-up stories from the battlefront. You find the authorities many-faced. Rumor and hearsay now drive the implementation of new policies and the prosecution of subjects in court. The DWN itself is perhaps the genesis of all rumors. But is it intentional that DWN distributes different information to different sectors? Are the different presses acting of their own accord or is DWN regulated by one authority? The answer doesn’t matter to you. Your experience is the same one way or the other.
‍
After becoming well-read and well-traveled among your peers, you insist to your friends that there may not be one person or institution that is the master rumor creator to dictate the rumors. The rumors initiate at a random rate, at random places, like mutations. Truth is not absent; truth is shredded into fragments of mutated or intact small “truths” and each fragment serves a community of humans who believe it as the basis of their epistemology.
‍
Since the city was founded on the precaution against Minotaurs, the urban facilities and culture have long compartmentalized the city dwellers. To ensure safety necessarily meant to mislead the Minotaurs, and under such extreme defense measures, the city has become a reverse maze that traps millions of dwellers all together with the Minotaurs. DWN became the central body of information dissemination despite its inconsistent turns, because no one could simultaneously learn news or knowledge from all locations. Information is disseminated vertically from DWN directly to the individual, but never horizontally across a large number of individuals. But no one could resist the belief in the consensus of their immediate local circle.

You were neither surprised nor triggered. You realize that the answer has always been blatantly evident and visible: the buildings are always three to four identical types, but the rotation of the rotatory buildings is uncontrolled. Back when you were a child, you always believed that the rotation was on a set schedule like traffic lights you once read about in the Exotic World News section ofDWN. There are no traffic lights in your small city, because tightly interlocking buildings don’t permit traffic or roads. But you now understand the mechanism at a depth that wakes you up from a long dream that you used to live in. The rotation of each single rotatory unit is random at any given time. When a rotatory unit turns 90 degrees, it leads to and from different buildings, corridors, and doors. People became acclimated. Culture developed accordingly. In your culture, you don’t have any tradition of going to routine destinations: children are homeschooled, people don’t have one designated physician but always go to a new clinic each time; entertainment other than newspaper reading is purely serendipitous – you visit a concert which you accidentally run into; some buildings are immutable but your culture doesn’t acknowledge immutable real estate properties; people may have the illusion of staying in the same room all their life but it was because all inns are exactly identical including their surrounding environment and interior layout. You are constantly on your way. Random rotations never permit navigation—as navigation requires omniscience—but simultaneously, they strangely never allow lostness.
‍
Facts become nullified in the process of verbal spreading—each individual’s own fact is the result of intake from the immediately prior verbal source. But just like fact, rumor is nullified since reality is the consensus you share with many people in your geographical and cultural vicinity. In a tightly packed sprawl of randomly rotatable buildings, it could take you from several months to a decade to visit a relative from another cohort. But in your middle age, you developed this obsession of questing, travelling from block to block, from district to district, to collect newspapers. Most commonly, when you finally reach a different destination, you find the people don’t speak your language. Even if they do, they usually have drastically different opinions about the world than you do, informed by different notions of common-sense and values, sometimes rendering communication futile. Because everyone, including you, cannot get exposed to all the information in one lifetime. You once arrived at a place with playing cards on the walls, where you stared one whole day musing about the misalignment of the rotationally symmetrical kings and queens. Your knowledge and experience are the immediate and local.
‍
The whole world functions on the level of particularity. There are a thousand perspectives. Rumor is not the enemy of truth; collision is. Rumors are just fragmented and randomly mutated facts that are the supporting pillars of a community’s immaterial life and rationality, maintained in a beautiful balance. Collision breaks that balance because it reveals the relativity of truth. The home that cannot be more familiar to you becomes a maze of illusion in your old age. A lifetime of reading and indefatigable questing makes you disenchanted and awakened. In your sleep, you dream about a sheet of paper with simple but incomprehensible marks congregating and rotating in random directions, and every time you try to look at the whole page, it begins to sink in a pool of dark blue ink and disappear.
‍
In your eighties, you still persistently travel. But this time, you do not travel in the pursuit of omniscience; you travel in hopes of encountering a Minotaur. You believe that finding him will lead to your spirit’s liberation. Although sightings of the Minotaur have not been reported in the past 200 years, you still go on looking, and you will look for him until you cannot walk anymore.

You live in such a city: there are only two types of buildings, buildings that are immutable and those that are rotatory, and the rotatory ones rotate at a random rate. And they look monotonously similar.